October 1, 2020 - After a career that started as a Summer Helper at Central Maine Power in 1979 and ended with a 9-year stint as Business Manager and Financial Secretary for IBEW 1837, Dick Rogers has retired. IBEW 1837 Assistant Business Manager Tony Sapienza will assume the Local Union’s top job.

“We work for the members,” Rogers said.  “I always kept that in my mind. A number of people don’t realize the time that goes into doing this job, the time and the commitment. It is a 24/7 job because we have shift workers. I tried to return all calls and be a straight shooter.”

Early in his tenure at CMP, Dick realized there was something about being an active participant in the Union that appealed to him.

“In 87 or 88, I watched a Union Steward named Chuck Applebee talking to a manager, say ‘Bob, we have a right to bitch.’ I knew right then that it was a job for me,” Rogers said. He was appointed to be a Union Steward in the early 90’s.

During his three 3-year terms as Business Manager, Rogers was a skilled negotiator of collective bargaining agreements and grievance settlements. Not surprisingly, that’s the part of the job that he liked best.

“I was lucky to have people around to give me good advice,” Rogers continued, “especially Bill Dunn, International Representatives Ed Collins, Dick Deering, Tiler Eaton, our Stewards, E-Board and staff including Debbie and Laurie in the office, as well as the AFL-CIO. Also our attorneys Jon Beal and Jeff Young. I will never forget how supportive 2nd District VP Mike Monahan has been. That's a fact. The support of my wife was huge . . . ” he said as his voice trailed off.

Rogers lost his beloved wife Jackie this past summer after her brave fight with cancer. They had been high school sweethearts and together ever since.

"It has been great working with Dick during his time as Business Manager and prior to that as a fellow Chief Steward,” said IBEW 1837 President Michelle Crocker. “His dedication to the membership has always been his first priority. Dick has worked hard during his time as Business Manager, helping to further develop and improve the policies and procedures to keep our Local running efficiently.”

Rogers will continue to consult with the Union for the time being and plans to help with some upcoming contract negotiations. When he’s not doing that, he looks forward to spending more time in the North Woods and with his family.

Please join us in congratulating Dick on his well-deserved retirement! 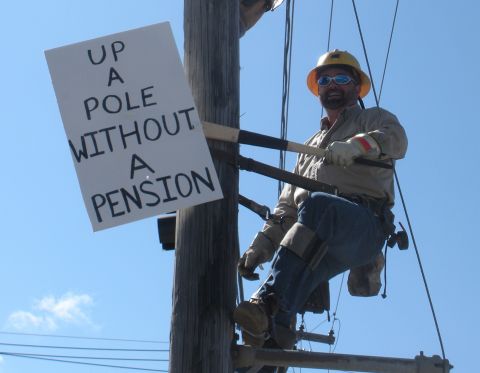