January 9, 2023 - Vaughn Bridges has retired from Central Maine Power after an incredible 64 years working for Maine’s largest electric utility. The 86-year-old Service Worker 2/C had the longest tenure of any member of IBEW Local 1837 and apparently worked longer than anybody for any Avangrid affiliate.

“As far as I know, nobody from Spain, Japan or anywhere has worked as long,” Brother Bridges said. “When they were handing out service pins, that’s when they realized it.”

Starting out as a Meter Reader Apprentice in Bucksport in 1958, Bridges worked many jobs at CMP, moving to the Belfast Service Building around 1973 and up through the ranks, finishing his lengthy career in Belfast.

“I really loved my job and the people around me,” he said. “Everyone has been great. I have no complaints.”

Bridges is part of the CMP retirement wave at the end of November when higher interest rates were set to adversely impact the lump sum payouts on defined benefit pension plans. It just made good financial sense for him and dozens of other employees to retire at that point in time.

“It was time for me to go although I still would like to be working,” Bridges said. “It was a long time, but it went fast.” 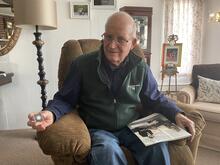 Brother Vaughn Bridges admires his new "IBEW retiree" pin presented to him by a member of the Local 1837's staff late last year.

December 14, 2022 - IBEW 1837 members at the Kittery Water District have ratified a new 2-year contract agreement with improvements in wages and benefits and without any concessions. The District’s trustees, who actively participated in the negotiations along with the District Superintendent, must formally approve the agreement when they meet on December 21.

“We’re grateful to negotiating team members Linda Johnson, Matthew Crosby, and Brandon Woods for the time and effort they put into negotiating an excellent contract,” said IBEW 1837 Organizer and Business Representative Matt Beck. “To their credit, the Trustees recognized the value of their employees and wanted to ensure that the Kittery Water District continues to be an attractive place to work.”

The 2-year contract agreement includes $2.00 per hour wage increases in each year and maintains 100% health insurance coverage paid for by the Kittery Water District. Other improvements include larger longevity pay increases, increased boot allowances, new mileage and toll reimbursements for use of personal vehicles for District business and an additional personal day added to recognized holidays.

The 15 workers at the Kittery Water District include office staff, filtration plant workers, laborers, meter readers, service technicians and others. 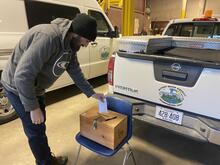 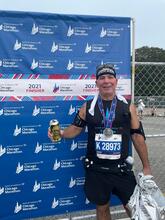 June 30, 2022 - IBEW 1837 members at Sea-3 approved a two-year contract in June with 5% wage increases each year, July 2022 and July 2023. The agreement includes Sunday premium increases to $10 per hour and boot allowance increases to $150 per year. There are no changes to the health plan and the cost sharing.

The sick plan is changing to a personal day plan. There will also be a transition from the existing pension savings plan into the union-sponsored National Electrical Annuity Plan.

President Joe Biden electrified the IBEW Convention in Chicago on May 11, drawing thunderous cheers for infrastructure

April 20, 2022 - IBEW Local Union #1837 members at the electric utility serving a large swath of northern and eastern Maine have approved a two-year contract extension offer with pay increases for all classifications and no change in their health insurance premiums or other benefits for the term of  the extension. 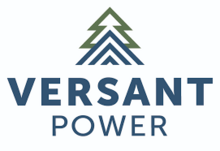 March 4, 2022 - Kitty Kilroy has been appointed as a new Business Representative for IBEW Local #1837. Sister Kilroy will have many responsibilities including staffing our Dover, New Hampshire office, following the retirement of Sue Ekola, our secretary for the past 24 years.

“I’m proud to work for the union. I’ve always been honored to be asked to represent people and proud that people have faith in me,” Kilroy said. “I look forward to putting our members first and helping them fight the good fight.” 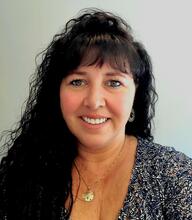 Inside Summer 2022 issue of The Current: