February 8, 2021 - A union organizing campaign by registered nurses at Maine’s largest hospital has captured the attention of union members and hospital patients throughout Northern New England. It also has earned a rare public endorsement from IBEW Local Union #1837.

“We’re proud to stand with the registered nurses at Maine Medical Center as they join together to form their union,” said Michelle Crocker, President of the International Brotherhood of Electrical Workers Local #1837. “Our local union E-Board, made up entirely of rank-and-file union members from our represented companies, voted unanimously to support them in this important effort.”

“We regret that the hospital administration seems to be employing the same tired, old union-busting tactics that their anti-union consultants often favor,” Sister Crocker continued. “We urge Maine Med’s administration to show these heroic RNs the respect they deserve and let them make their own decision without the unrelenting pressure that only serves to make their jobs more difficult.”

Ballots will be mailed to the nurses from the National Labor Relations Board in late March to determine whether the Maine State Nurses Union will be certified as their representatives for collective bargaining. The ballots will be counted on April 29, 2021. 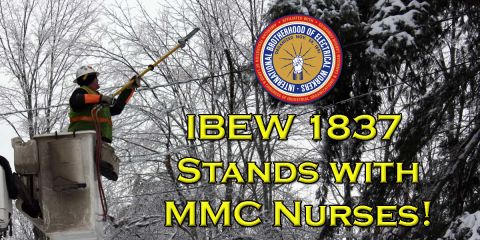