July 19, 2021 - The Maine House of Representatives failed to override the veto by Governor Janet Mills of a consumer-owned utility bill 68- 65, far short of the necessary 2/3 margin. That means that voters will not see a referendum question creating Pine Tree Power on the ballot this fall. If approved by voters, Pine Tree Power would have replaced Central Maine Power and Versant Power with a consumer-owned utility. The bill’s proponents pledged to collect enough signatures to place the question before voters in November 2022.

When a prior version of the legislation was first introduced in January 2019, IBEW 1837 was committed to participating in the process to ensure that employees and ratepayers' interests were at the forefront of any proposed legislation. After a careful and painstaking review of the final legislation by our legal counsel, the Union decided to come out against the bill. Of the utmost concern was the possible loss of private sector collective bargaining rights guaranteed under the National Labor Relations Act if the new utility is classified as a public employer.

“We’re pleased that Gov. Mills has decided to veto LD 1708, the Pine Tree Power bill, and that the Legislature has sustained her veto,” IBEW 1837 Business Manager Tony Sapienza said. “While we appreciate and recognize efforts made by lead sponsor Rep. Seth Berry to craft legislation that would be good for our members and Maine ratepayers, the change to a consumer-owned utility would bring with it tremendous risks and uncertainty. Although Maine’s investor-owned electric utilities are far from perfect, we’re committed to working with them to improve service for Maine’s ratepayers and to making those utilities better places to work for our members throughout the state. Therefore, we are opposed to replacing Central Maine Power and Versant Power with a consumer-owned utility.”

In order to place a referendum creating a consumer-owned utility on next year’s ballot, the number of valid signatures required would be 10 percent of the total votes cast for governor in the last gubernatorial election. That means that supporters would need to gather at least 63,067 signatures from registered voters in Maine, a difficult but not insurmountable task.

Both utilities – particularly Central Maine Power – have suffered in recent years before the court of public opinion. Central Maine Power has been criticized for their storm response and billing issues. CMP’s pursuit of the New England Clean Energy Connect project to bring in power from Hydro Quebec is deeply unpopular with some voters.

Supporters say a consumer-owned utility would put the interests of ratepayers ahead of corporate investors, eventually leading to lower electric rates, more investment in the grid and better system reliability. Opponents say it is essentially a government takeover, would likely lead to less investment in the electric grid, put Maine $13.5 billion in debt, and would end up making IBEW workers public employees, with fewer collective bargaining rights and subject to furloughs and deferred wages that other state employees have faced. 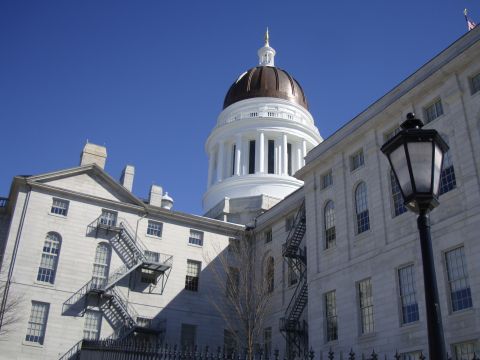 The legislature convened on July 19 to consider vetoes including LD 1708.