Workers Speak Out Against NH "Right to Work" Bill

March 25, 2021 - At a hearing of the New Hampshire House Labor, Industrial and Rehabilitative Services Committee, the overwhelming majority of people testified in opposition to the so-called “Right to Work” bill. Elected union leaders were joined by rank-and-file union members in urging committee members to vote “Inexpedient to Legislate” on the union-busting bill, SB 61. Similar bills have been considered dozens of times in the State Legislature and have always failed to become law.

“The only purpose of this bill is to increase corporate power at the expense of working people,” IBEW Local #1837 Business Manager Tony Sapienza said. “Obviously, wages and benefits will erode faster or grow slower if corporations are empowered and collective bargaining rights are eroded.”

In addition to workers and their unions, other opponents of the bill included faith leaders, economists, small business owners and larger companies that rely on union apprenticeship programs for a reliable source of skilled workers.

Corporate lobby groups such as NH BIA were joined by the Virginia-based National Right to Work Committee in support of the bill. All testimony was given on Zoom at the virtual hearing.

Prior to the hearing, it was announced that just over 200 people from New Hampshire had signed on in support of the bill on the NH General Court website while more than 1,700 had signed on in opposition to it, a margin of more than 8 to 1 against Right to Work.

One of the last people to testify against the bill was Pat Moran, a Troubleshooter for Eversource NH and a Chief Steward for IBEW Local 1837.

“I feel strongly that Senate Bill 61, the so-called Right to Work bill does not belong in New Hampshire. I believe this is a means to break unions,” Brother Moran said. “The name itself is a lie. Right to Work doesn’t give anyone any rights or any work. It is meant to hurt unions financially in the hope that they will wither and die. This would be a major disaster to New Hampshire’s working families.”

A work session is expected next week with a final vote before the full New Hampshire House of Representatives likely to come in early April. 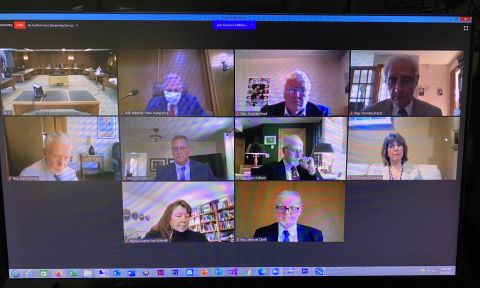