IBEW 1837 Joins Effort to Save Brookfield Dams on the Kennebec

IBEW 1837 has joined Brookfield Renewables and the Kennebec River Alliance in a bid to prevent the removal of dams on the Kennebec River where our members work generating electricity. A proposal to amend Maine’s Kennebec River Management Plan and remove at least two and eventually as many as four dams has been withdrawn. That apparent victory for dam supporters was just one step in a complicated and hard to follow licensing process.

First, Maine’s Department of Marine Resources (MDMR) said removing the Lockwood Dam in Waterville and the Shawmut Dam in Fairfield would allow 99% of endangered Atlantic salmon to move upriver to spawn and create new recreational opportunities and economic development. But others noted that Brookfield’s plan would allow 96% of salmon to make it upstream and removal of the dams would negatively impact recreational opportunities that the dams provide, hurt the local economy, cause tax increases in local communities and lead to the loss of good-paying union jobs.

IBEW 1837 member Ed Goodale testified at a public hearing in June about what he’s learned after working on Maine rivers for nearly 33 years.

“The people doing these jobs truly care about their river system and feel more like a steward of the river than just a hydro tech,” Goodale said. “Brookfield and their employees have proven they can and will operate their generating stations both safely and environmentally friendly. All work is done with safety and the environment in mind first. Brookfield and their employees maintain the motto of doing the right thing.”

Maine DMR eventually dropped efforts to enact their plan for the entire river after Brookfield filed a lawsuit saying the agency was overstepping its authority.

In July, in a draft environmental assessment as part of the relicensing process of the Shawmut Dam, the Federal Energy Regulatory Commission (FERC) found the salmon can be protected without dam removal. They went further in stating that dam removal is not a reasonable alternative and that Brookfield’s plan to construct an upstream fish lift and downstream passage improvements would be sufficiently protective of target species. FERC also supported Brookfield’s proposal for maintenance of recreation amenities for the 40-year license term.

IBEW 1837 and the Maine AFL-CIO filed comments supporting the findings of the FERC draft assessment and the Brookfield licensing plan. The impoundment of water the dam provides the industrial water supply necessary to operate the Sappi Somerset Mill, where about hundreds of union members work in an integrated pulping and papermaking operation making coated freesheet papers, grease-proof packaging papers and bleached chemical pulp.

In August, the Maine Department of Environmental Protection (DEP) indicated that they were likely to deny Brookfield’s application for a water quality certification, relying on the earlier MDMR findings. Without the water quality permit, FERC may not renew Brookfield’s license to operate the Shawmut Dam. Brookfield withdrew its DEP application and indicated its intention to file a new application within 60 days that would give greater weight to the FERC draft review. The DEP would have a year after receiving the application to make a decision.

That caused Maine Senate President Troy Jackson, D-Allagash, and Maine House Speaker Ryan Fecteau, D-Biddeford, to propose legislation that would establish “reasonable standards” for permitting and operation of dams in the state, giving the Maine Legislature a greater voice in the process. The new legislation prompted Governor Janet Mills to issue a statement saying “People outside the (Sappi) mill, including politicians and the dam owners, have wrongly suggested that the state is requiring the removal of the Shawmut Dam, going so far as to employ scare tactics and to suggest that my administration wants to close the mill. Let me be clear: this is untrue. It is not necessary to remove the Shawmut Dam in order to allow fish to pass through successfully.” 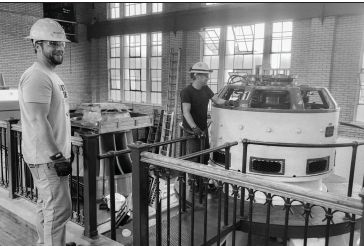