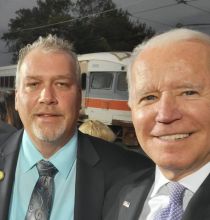 President Biden appeared at the Electric City Trolley Museum in Scranton on October 20 to promote his domestic agenda and the hundreds of thousands of jobs that will be created to rebuild the nation’s degraded infrastructure.
There to meet him backstage was Scranton Local 81 Business Manager Mike McDermott.
The industrial city in northeastern Pennsylvania known most recently as the setting of the fictional Dunder Mifflin in “The Office,” Biden grew up there. Known as “Scranton Joe,” Biden strongly identifies with the town and its working class values. He is that guy, McDermott said.
“He was... Read More
Boosting the Power of the Federal Workforce
In a welcome reversal from past administrations’ attempts to stifle the power of unions in the federal sector, the Biden administration is actively encouraging more worker participation in collective bargaining.
“We are proud as the Biden Harris administration in what we believe we will be, which is the most pro-union administration in the history of America," Vice President Kamala Harris said on Oct. 20 announcing the new guidelines. Among them are:

Including bargaining unit status and union affiliation in job announcements
Giving unions the opportunity to share information with new... Read More
Former Mine Workers' Official Appointed as OSHA Head
After nearly five years without a confirmed leader, the Occupational Safety and Health Administration is headed by worker safety advocate Doug Parker.
“Finally after 1,747 days, @OSHA has a champion for workers right as its director,” said AFL-CIO President Liz Shuler. “Doug Parker will advocate for safe working conditions for all and hold employers who violate workers’ right accountable.”
Parker, who headed California’s division of occupational safety and health for the past two years, is likely to increase the agency’s inspectors and enforce its anti-retaliation rule. One-time staff... Read More
Giving Pro-Worker Appointees a Voice 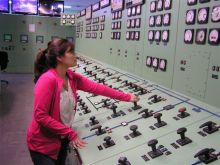 IBEW members like this employee of the Army Corps of Engineers will benefit from pro-worker nominees on the Federal Labor Relations Authority.

Continuing a trend of filling labor-related posts with experienced pro-worker nominees, President Biden has selected Susan Tsui Grundmann and Kurt Rumsfeld for seats on the Federal Labor Relations Authority.
“Federal workers can breathe a little easier now that President Biden has not only filled these vacancies, but has done so with experienced individuals who understand the importance of the work that our federal workforce does,” said Government Employees Director Paul O'Connor.
The FLRA oversees disputes between federal agencies and their employee unions. If confirmed by the... Read More
Unit Meetings Schedule Revised and Some Locations Changed Due to COVID-19
September 24, 2021 - The Covid-19 pandemic has forced the relocation, postponement or cancellation of some meetings. Please contact your steward, the union office, or log on to www.ibew1837.org before driving.
IBEW 1837 has moved some meetings online via Zoom for Units that have lost their meeting locations or have chosen not to meet in person. Union staff is available to meet on an as-needed basis where meetings are cancelled.
Please consider wearing a mask when meeting at indoor locations.
You can download and print an updated schedule here.
Unit 1, Dover: Fourth... Read More

College Scholarships Available for IBEW Members and Dependents
Each year, the Union Plus Scholarship program offers college scholarship money to union members and their dependents. Applications for the 2008 program are now available and the deadline to apply is January 31.
You can find out more about the program and download an application at the Union Plus website. 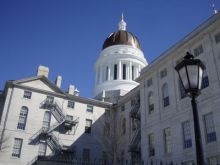 The legislature convened on July 19 to consider vetoes including LD 1708.


July 19, 2021 - The Maine House of Representatives failed to override the veto by Governor Janet Mills of a consumer-owned utility bill 68- 65, far short of the necessary 2/3 margin. That means that voters will not see a referendum question creating Pine Tree Power on the ballot this fall. If approved by voters, Pine Tree Power would have replaced Central Maine Power and Versant Power with a consumer-owned utility. The bill’s proponents pledged to collect enough signatures to place the question before voters in November 2022.
When a prior version of the legislation was first introduced in... Read More
IBEW 1837 Launches New Site
IBEW 1837 has launched a cutting edge web site to better server its members. 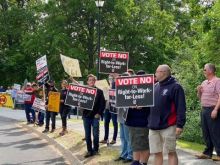 Hundreds of Union members turned out to line the streets outside the NH Sportsplex in Bedford the morning of the final House vote.

June 4, 2021 - In a tremendous victory for working people and their unions in the Granite State, the New Hampshire House of Representatives soundly defeated “Right to Work” legislation on Thursday,  June 3, by a vote of 199-175. That was followed by a 197-178 vote to indefinitely postpone the bill, effectively killing it until at least 2023. The morning of the vote, hundreds of Union members carrying “Vote No” signs lined the streets leading to the NH Sportsplex in Bedford where the session was held.
“This legislative victory was only possible because of the great work done by members of... Read More
IBEW 1837 Delegates to 40th Int'l Convention Selected

May 15, 2021 - The following members of IBEW Local #1837 have been nominated and selected to serve as delegates to the International Brotherhood of Electrical Worker's 40th International Convention in Chicago:  IBEW 1837 Business Manager Tony Sapienza, IBEW 1837 President Michelle Crocker, IBEW 1837 Organizer/Business Representative Matt Beck, IBEW 1837 Vice President Bob Mc Neff, Kitty Kilroy, and Bill Tarallo. Since the number of nominees was equal to the number of delegates for our Local, there will not be an election held for those seats.
The 40th International Convention was... Read More 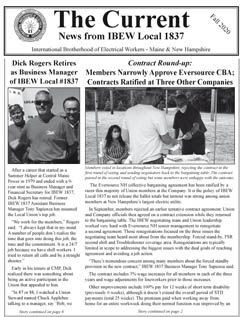